"Gen" means original, professional and "Bu" refers to martial arts. "Kai" means organization. The Genbu-Kai is an international organization that encompasses 32 countries and thousands of members.  The name Genbu-Kai was given by Shihan Fumio Demura, who is the director and chief instructor.  He continues to find more ways to introduce martial arts to people throughout the world, with the primary goal of helping people to be better human beings and have better, more successful lives.   Shihan Fumio Demura’s dojo is the Genbu-Kai headquarters which is located in Santa Anna CA., and one of the oldest karate schools in America. 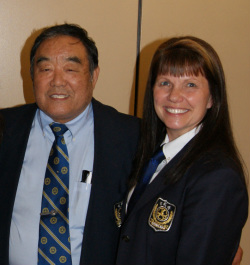 Sensei Anderson was a Professor of Exercise Science for nearly 30 years, with a Ph.D. In Human Bioenergetics from Ball State University. She is a co-author of Nutrition for Health, Fitness, and Sport (10th edition), a Certified Sports Nutritionist through the International Society of Sports Nutrition, and a Certified Strength and Conditioning Specialist through the National Strength & Conditioning Association. She is a Senior Associate Editor for the Journal of Strength and Conditioning Research and both Advisory Board Member and Scientific Advisor for the International Society of Sports Nutrition.
Shihan Fumio Demura - MAIA 2018 Lifetime Achievement Award Winner!
​
MAIA 2018 Lifetime Achievement Award Video
Shihan Fumio Demura, 9th Dan, introduced Shito-Ryu Karate to the USA in 1965. He also introduced Okinawa Kobudo: Sai, Nunchuku, Bo, Tonfa and Kama.

He started teaching in California and was introduced to the public by Black Belt Magazine making him well known in the martial arts arena.

He started Karate demonstrations at the Japanese Village and Deer Park in Buena Park, California in 1968. The show was such a success it became one of the top attractions in the park, making it the first professional Karate demonstration in the world. After seven years of demonstrations the show moved to the Las Vegas Hilton. There he presented a daily show for two consecutive years.

He continued to be the stunt double for Pat Morita in the television series O'Hara and others for approximately 14 years. His movie credits also include Rising Sun, Mortal Kombat, Walker Texas Ranger and many others.   In addition to his acting career he travels throughout the world to present martial arts seminars, conduct demonstrations and give radio interviews.

Rather than emphasizing competition. Sensei Demura emphasizes personal growth and mental discipline in his training to help people become better human beings. Through his open mindedness he has been an example to others including: Bruce Lee, Chuck Norris, Steven Segal, Sho Kosugi, Mike Stone, Richard Norton.... and many other top world martial artists today.

Today Shihan Demura serves as director and Chief Instructor for the Shito-Ryu Genbu-Kai International. An organization encompassing thirty-two countries and thousands of members. He still teaches at his Santa Ana, California Dojo and most weekends are spent giving seminars or assisting at tournaments literally throughout the world. Each February, he hosts his annual Goodwill Championships in Costa Mesa, considered by many to be the foremost traditional tournament in southern California.

Shihan Demura is an authentic Karate Sensei. Combining the traditions of the past with modern approaches to training, he is regarded by his students with love, trust and admiration. In his personal life as well as within the walls of the Dojo, he is a living model of what all true martial artists strive to be!